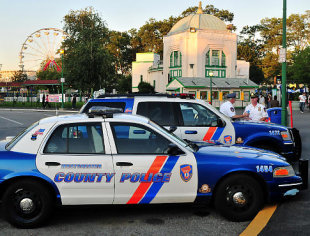 Police on the scene at Playland on Tuesday (Norman Y. Lono for NY Daily News)

Rye Playland was shut down Tuesday after cops scuffled with Muslims upset that women wearing head scarves were barred from the rides, witnesses said.

Fifteen people, including three women, were charged with disorderly conduct and assault in the chaos, authorities said.

The Westchester County park was packed with Muslims celebrating Eid-ul-Fitr - the holiday marking the end of the Islamic holy month of Ramadan.

The ban, which is not Muslim specific, was imposed about 3 years ago mostly to prevent hats from falling onto the tracks of roller coasters and other rides, park officials said.

Her cousin, Kareem Meawad, 17, went to try to protect the woman and was beaten by cops and also arrested, she added. Her brother, Issam Meawad, 20, was pushed to the ground and taken into custody when he tried to help his cousin, she said.

"She just wanted to get on a ride. That was it," Dena Meawad said of the initial confrontation. "It's clear, this all happened because we're Muslim."

He said up to 100 cops from surrounding departments converged on the park.

The ugly incident happened just after 1 p.m. The event was organized by the Muslim American Society of New York, and attracted 3,000 Muslims from Brooklyn, Queens, the Bronx and Westchester County.

Ali's sister, Ayman Alrabah, 24, of Brooklyn said her husband, brother and father were all tackled by cops and put into handcuffs when they tried to help her sister.

Alrabah said she was unaware of the head-scarf rule until she and her sister tried to get on the park's Dragon Coasters.

"We requested a refund and all of a sudden an argument became a riot," Alrabah said. "Cops came. They were hitting my brother, my dad. My husband was on the floor and they were handcuffing him.

She said her 4-year-old son was "traumatized" by seeing his father arrested.

"They treated us like animals, like we were nothing," Alrabah said. "They came with their dogs and sticks. We came to have fun." 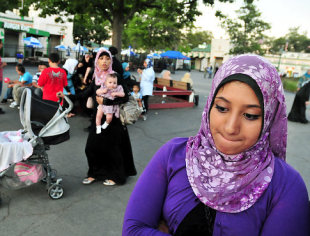 The park was closed for about two hours because of the fracas. It reopened at about 6 p.m.

"Part of our rules and regulations, which we painstakingly told them over and over again, is that certain rides you cannot wear any sort of headgear," Tartaglia said. "It's a safety issue for us on rides, it could become a projectile."

Many Muslims were given refunds as they left the park disappointed.

"In this heightened state of Islamaphobia, a woman wearing a hajib is an easy target these days," said Zead Ramadan, president of the Council on American-Islamic Relations - New York. "Unfortunately, this turned ugly due to a lot of miscommunication."